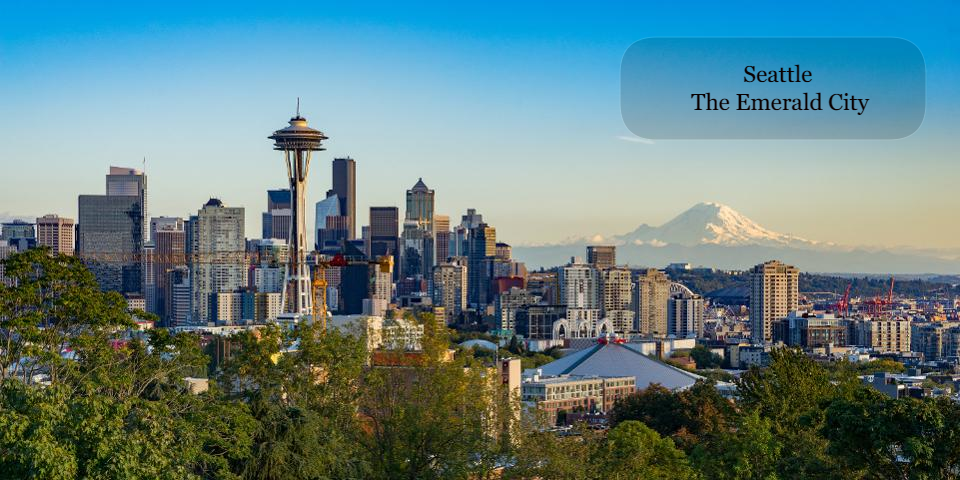 Every city has an interesting backstory to it. Whether it is to do with the people or places, history becomes prominent for a city’s nickname. While we do know that a few cities have it easy, there are some that are difficult to comprehend. Well, Seattle falls on the latter bucket acquiring its name as the ‘Emerald City’! Most people ponder if Seattle got its name from the ‘Wizard of Oz’ or if the city is a birthplace to emeralds. The answer is an instant NO! The backstory is that Seattle has a lot to do with how the city looks – green and plush. The city is pretty much surrounded by greens all around the year which is why it is called the Emerald city denoting the color of its environment.

Just take a stroll around the city to observe the lovely neighborhoods. Starting from the Discovery park to Washington Park Arboretum, Seattle is riddled with all sorts of greenery. You can see the green thrive all through the seasons. It is also a city that sounds of Puget and is surrounded by water, hence explaining the vegetation. With over 700,000 citizens and about 3.7M in the greater metropolitan arena, Seattle’s identity is also encircled by its 10,000 year old history. The ethnic and indigenous storytelling and constant craving to be the best in nature and art, makes the city charming and magnificent.

Did you know that Seattle has constantly bagged ‘America’s Most Well-read City’ award? Its writing practices are steered by a sense of location, notably with reverence to an inclination towards embracing disparate opinions and technologies. The literature scenes in Seattle reveals absolute depth, impressive cohesion and solidity in featuring indie writings, comics and self-published books. There is a whopping growth of 44% for art, literature and culture in the past 5 years in Seattle. The city has invested in creative vitality and cultural neighborhoods that makes the city much more than just environmentally friendly and swanky.

The city envisages a great economic impact apart from just literature and arts. Also famous for its information and technology industries, it has established 53% growth in white collar job sectors. The social equity and marginal improvement of proactive integrating of art, culture and technology has made the city palatable for most of its citizens and outsiders. Seattle is not known for its wine or beer crafts; it is famous for the outlets of Starbucks. The city is a hub for coffee lovers, making ‘Starbucks Reserve Roastery’ and ‘Tasting Room’ for an immersive, potential future progress experience for the coffee lovers.

Seattle’s community is a mix of residential and commercial complexes with walls of graffiti, shops of flowers and coffee brewery every 100 meters. With the obvious choice of Seattle art museum, one wouldn’t miss the Capitol Hill which is inundated with entertainment and creative cultural haven. Living through the city’s music vibes for yourself at a series of live music spots, Seattle can make it a riveting city to live and visit!


To promote your business in Seattle city, it is vital to communicate the local audience in their native language. This can be easy to achieve for the businesses who opt for Seattle translation services from Click For Translation. We support 100+ languages and different language combinations. Contact us for more details.