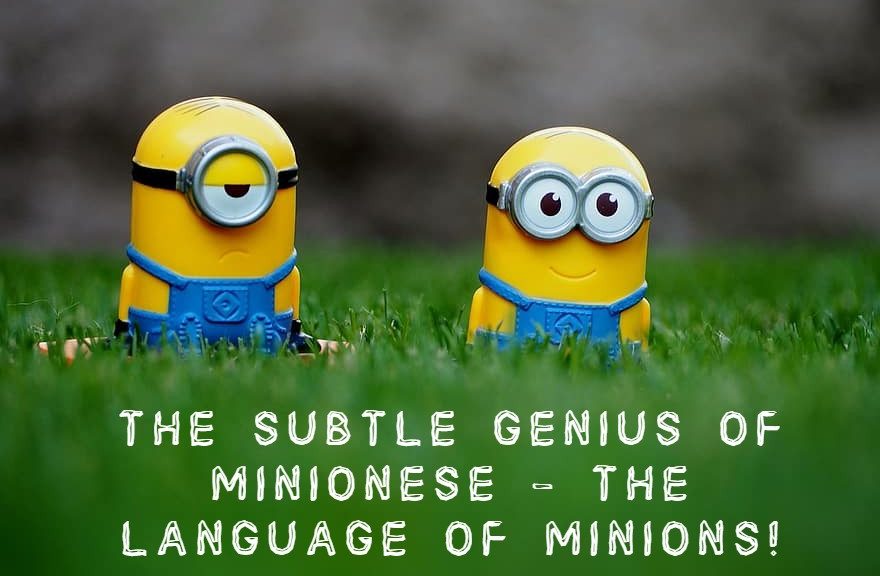 Bababa Babanana – Have you figured out the Minion language yet?

For several decades now, movies have taken their own way of communicating with fans. Whether it involves inventions or languages, TV has become the largest form of entertainment where characters etch into people’s hearts making a lot of difference. Starting from the Klingon language of Star Trek to Dothraki of Game of Thrones, the indulgence of pop culture has made a huge impact amongst the fans and viewers. To add to the list is the cutest version of invention – the Minionese language from the Minion movies. Even the most unrelatable person would be awed by the cuteness of this language mainly because it is spoken by the minions themselves.The dialect is hilarious, adorable and very fascinating to listen and learn. But are they inspired by real languages? According to many proven reports, these are words that are taken from three or four different languages including Onomatopoeia (where the words sound exactly like what they mean). Have you indulged a little further on this? This blog will talk more about the languages that Minionese is borrowed from.

Inventors of the language, Pierre Coffin and Chris Renaud reveal that the language is mainly based on rhythms, sounds and literal connotations of words. Despite the complexity in learning or understanding the language, it has been swiftly amassed an inspiring and extraordinary following amongst people. These fans have been eager to learn and communicate for fun in the otherwise called banana dialect. The inventors have also asserted that the language doesn’t intend to sound good but is a random mixture of many words for enjoyment.Don’t we all know it is immediately the minion song once we hear the following famous words?

The Notable Features Of Minionese

The language is a spin off from many dialects such as Chinese, Russian, Spanish, French, English, Italian, Filipino and so on. While words like ‘para tu’ and ‘la boda’ are taken from Spanish which means ‘for you’ and ‘wedding’ respectively, ‘poulet tikka masala’ and ‘et pis c’est tout’ roughly translates to ‘chicken tikka masala’ and ‘that’s all’. The makers of the movie have made it a point to focus on making the language understandable only for the minions and not anyone else.

The way it is spoken makes a difference:

Like any other language, Minionese has an inflection that is spoken by the voice over artist. We audience have become so accustomed to the way a voice sounds that we instantly pick up the mood of the scene. This is the same with Minionese as well. An audience can easily pick up the scene’s intensity even if the language is unrelatable and confusing. It is generally found that 93% of the meaning is expressed through vocal intonation and body language, leaving 7% to the actual words spoken. Since minions are aimed at children fans, the directors have made a brilliant move of concentrating on body language and voice modulations. Isn’t this pretty genius?

The first word that the Minions use in the movie starts with the obvious famous word in any other language. ‘Hello’, is translated to Bello! The following words can help you figure out roughly how the minions spoke and the meanings of the same from different languages:

However, there are also other words that are mostly English but come under the Onomatopoeia language. These are also words that are vividly seen and heard speaking by the Minions in the movie.

You should also understand that there might be analogous sounding words, that can mean very different things. For example, in English, we pronounce ‘sun’ and ‘son’ the same way, but they have different meanings and spellings. This applies to Minionese as well. It is actually very intriguing that ‘Baboi’ means three different meanings in three different situations in the movie. The same applies to the word ‘Poka’. It can mean both ‘what’ or ‘screw it’ according to the instances of the movie. Well, the linguists have clarified that ‘poka’ could be spelt as ‘boka or boca’ and ‘baboi’ could be spelt as ‘papoi’.

Why Do The Minions Speak A Bit Of Everything?

As we all know, the minions are always on the search for the right master. They keep jumping countries, places and almost live a nomadic life. During their adventure of searching for the next best master, they soak up in all languages across the globe. The very fact of the Minions toppling pretty much every instructor they find explains to us as to how their mother tongue can be so varied. Minionese is not purely a baby language by itself. The makers have taken inspirations from around the world and from things in Spanish, English, French, Hindi and so on.

On the whole, it is suggestive that the international linguistic conglomeration of words has made the banana language lovable and cute. It has been seamlessly deployed in a way that fits the context and the characters making it quite an affable language of its own. It probably wouldn’t be startling if the Minion’s language eventually starts picking up and becomes more famous amongst the younger generation. The language is light, easy and pretty much a culmination of everything you should know.

With the ‘Minions – The Rise of Gru’ on its way, we are sure you are thrilled to jump into the world of these cute yellow nuggets. Here’s to all the forthright Minionese – fluent speakers/viewers. If you can grasp this peculiar, gibberish-soaked language, then evidently, you can do everything.