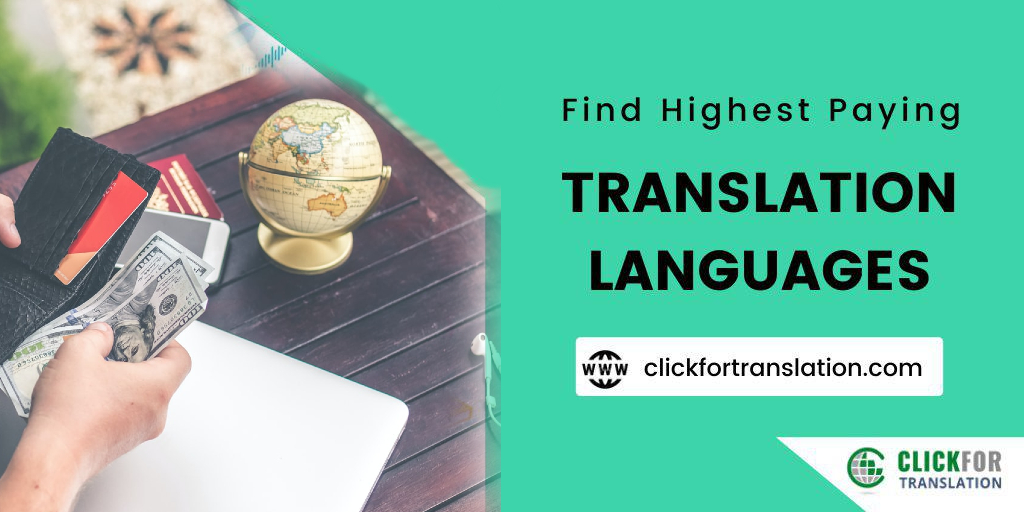 The field of translation has been put to demand a lot in many industries and resources. If you are planning to change or start your career as a translator, or even if you are already bilingual, then this is a good opportunity for you. Before jumping into the job, understanding the detailed aspects of a language such as grammar, nuances, dialects, accent, punctuation, sentence construction, long compound words, and phrases, etc. is essential.

There is nothing called a difficult translation or the hardest language to translate, unless you know every single element about it. However, choosing a language combination is important for you to work. It would be ideal to translate and work effectively in the languages that you are already well-versed, instead of translating bits and pieces from all languages.

Typically, the following 10 languages have the greatest scope for translation and are highly demanded by professors, immigrants, doctors, managers, executives, engineers, business heads, students, and professionals from various areas. You can freely decide upon the languages you opt for the job from the following highest paying translation languages taken from a global perspective.

Having the power to influence an economy directly, German language tops the list of highly paid translation languages. The language has a close relationship with the business world and is sure to pay well for every German translator out there.

On average, the German translators in the US earn around $50,000 annually. Even in the United Kingdom, professionals get an annual income of £34,000. Financial and corporate sectors have the highest demand for German translation services.

German is considered as a difficult translation by many. This is due to the presence of many long compound words present in the German language. For instance, ‘Donaudampfschiffahrtselektrizitätenhauptbetriebswerkbauunterbeamtengesellschaft’ is the longest German compound word present with proper meaning.

Near the United Kingdom, the French language translators have scope for earning a handful of income. Approximately, $19.49 is earned by French translators in the United States of America.

Did you know that the demand for professional French speakers has tripled since 1945? With a growing demand for studying in top France Universities and expanding business in French provinces, the need to translate documents and certificates in French has increased.

The French language has more than a million words in its dictionary and every year, 20,000 new terminologies are created. With the increasing search for French translation services, language experts and freelance translators can make use of this opportunity to earn well.

There are 300+ million Arabic speakers presently. Arabic to English translation services is one of the highest paying translation languages that has approximately $20.22 earned per hour by US translators.

This language is considered one of the hardest languages to translate even by experienced candidates. The Arabic language has a few sounds that do not exist in any other language. Even a few English words takes its origin from the Arabic language. These reasons influence Arabic to be both difficult and a highly paid job for a translator.

Every beginner needs to understand this language from the basic roots, since Arabic words have different forms which vary with the context it is used. The knowledge and awareness about the contemporary Arabic culture and their way of thinking will help you get income more than expected!

If you opted for a translation job in the Dutch language, then expect good pay from your works! Over £29,523 is earned by Dutch translators and language experts annually in the United Kingdom.

Having over 28 million native speakers, Dutch is undoubtedly considered one among the highest paying translation language in the world. Even 150,000 Americans prefer speaking Dutch in their houses.

It is important to note that, in addition to having dialectical and lexical knowledge, a translator must also have some basic understanding of the text expansion. For instance, English to Dutch translation, one of the highly demanded combinations, has a chance for expanding up to 35%.

A notable aspect of Chinese translators is that the ones who are fluent in both Mandarin and English are gaining the maximum benefit. Not only the Chinese language has evolved with many variations in its usage, but also several businesses are now under the ownership of Chinese.

A Mandarin-speaking individual who works as a translator can expect around $74.92 in the US. This average is on a ‘per hour’ basis. The pay gets higher as with the demand for what format is translated.

Chinese has over 900 million native language speakers worldwide. The only aspect that individuals have to concentrate on is that Japanese is the hardest language to translate and is regarded for a difficult translation service by many.

One of the most popular and highest paying translation languages of the world is Spanish. The demand for this language is seen highly in the corporate and financial sectors of the United States.

When it comes to speaking and spelling aspect of Spanish, learning this language is quite simple for many. What translators must make note of during their learning and translation phases are matching words with gender. This language originates from Latin and has words specific to masculine and feminine articles.

Translating the same with appropriate accompanying nouns in Spanish is the challenging part that gives you good pay! As a Spanish translator, you may expect to earn around $19.49 per hour.

Expect an annual salary of $50k in the US and £28,523 in the UK, if you are planning to work as an Italian translator. From the year of 1861 where it became an official language, nearly 85 million people Italian speakers are present globally.

There is a vast difference in the dialects of the Italian language. Translators must ensure that they are well-versed in dialects such as Tuscan, corresponding to the state. The overall Italian translation should give translation specific to their regional dialect and region.

The Russian language will help you to earn nearly $79,000 in the United States if you want to become a translator. Bilinguists are in high demand for Russian translation services in the fields of finance and trade.

Many financial documents and official papers are daily translated from Russian to English and vice-versa. A huge number of Russian immigrants prefer translating their certificates and personal documents for the USCIS.

You can definitely earn around $20.06 per hour in the US, if you turned out to be a Portuguese translator. This language has demanded translation from both within its official states and also from clients out of Brazil and Portugal.

Portuguese translation services are often needed for technical and business purposes. Regardless of how knowledgeable you are in Portuguese; it is equally important to learn about the culture and political aspects of this language. This is done to avoid any sensitive content being translated in the process.

Portuguese is noted for being the fastest-growing languages of the world after English. Therefore, a career in the field of Portuguese translation is sure to help you earn more than you expect!

Japanese is one of the unique languages that has majorly helped several job sectors to develop and expand globally. With regular updates and advancements in technology, Japanese is no wonder seen in the list of highest paying translation languages, even for beginners.

The challenging aspect of a Japanese translation lies in the fact that, this language is accounted by picking words from other languages. Japanese features for loanwords from languages such as German, Portuguese, and many more.

To all the aspiring freelancers and translators, no matter what language combination you choose, have a clear idea about your goal and start working in the most-effective way that suits you. Have an interest and love for the language that you translate, because the job of translation is much more than mere word-to-word language alteration .

Practice through various skill tests and jot down all your strengths and weakness in the language. The higher the accuracy and quality of your translation, the higher the income you get. Happy translation!

Click For Translation has translating language experts for 100+ languages. The agency is known for giving the best quality translations with the highest accuracy possible. Contact the 24*7 customer support for more details about any language translation services.